With the advent of FAB 2.0 came an officially-supported Commoner format. Decks can only include common-rarity cards in this format, although heroes can have up to two rare weapons and or equipment pieces.

If you’re new to the game or just like an exciting deck-building challenge, this format is a great way to experience Flesh and Blood in its fundamental form.

In this article, I want to share the most critical attacks, blocks, and equipment pieces to pick up that you’ll want to use in a majority of your Commoner decks.

To win a game in Flesh and Blood, you must defeat your opponent. While most of your attacks will likely come from your class and or talent, there are a handful of generic attacks that you’ll want to consider when constructing your list.

Several decks will be relying on their red-pitch cards for their offense. Red Ravenous Rabble has built-in go again, which will help you play out your entire hand on your turn. While you can’t fully control how much damage this card will present, you’ll want to include this card if you have more than a dozen red cards in your deck.

If you’re playing a Runeblade, then this card and a non-attack action with go again will bring your Rosetta Thorn online.

Rangers love this card because it gives them a glimpse at the top of their deck, and it’s an attack they can play from their hand.

Even Brutes love this card. Take Rhinar as an example; he could play this card and follow it with a Romping Club swing. That playline presents 6-8 damage from just 2 cards.

Red Wounding Blow, Scar for a Scar, and Brutal Assualt are classic on-rate attacks that should always be considered for your Commoner list.

Scar for a Scar could serve a similar role as Ravenous Rabble if you’re not intending on blocking too often. Its potential for go again lowers its block to 2, but a no-cost attack for 4 is usually valuable in your hand.

Both Wounding Blow and Brutal Assault are perfect examples of textless attacks. The former attacks for 4 at no cost, and the latter increases its cost by 2 to increase its price by 2.

In the 20-life race to the bottom, these cards could provide the stable value your deck needs to stay competitive.

As we explored from the attacks, getting 4 points of value from a single card is extremely valuable.

Sink Below and Fate Foreseen are common staples across all formats of Flesh and Blood. As a reaction, you can play this after your opponent buffs their attack from a card like Razor Reflex or Pummel. While most cards block for 3, these defense reactions come in for 4.

If you’re squaring off against an attack with dominate, then having one of these cards in your arsenal would allow you to block with 2 cards in the hopes of coming away in one piece.

Depending on the meta you expect to see, you may also want to consider Unmoveable at any pitch value. You’ll want to have a pretty hefty blue curve to consider that card, though.

There are more ways to stay alive than blocking in Flesh and Blood. Let’s look at some equipment options, too.

With pure blocking value in mind, you’ll need to consider the entire suite of iron pieces.

Ironrot equipment from Welcome to Rathe each provides a once-per-game block for 1. These are great to have as throw-aways to pair with your blocks from hand to cancel out a pesky hit effect. Consider these over Ironhides if you have a shallow resource curve in your deck (primarily reds).

If you do want to beef up your defenses, equipping Ironhide armor is a great way to show your opponent they are in for the long haul.

Blocking for 2 with these pieces of equipment does mean that you’ll need to utilize cards out of your hand to pay for the resource cost.

Currently, Ball Lightning is the only common card in the game that blocks for 0, so Lexi and Briar may want to consider running some Ironhides to use that card on defense. Of course, the Brute class also has a handful of commons with no defense value, so they will also want to consider packing on some Ironhide.

If you are looking to your equipment for more utility than defense, these pieces will likely be the highest demand from the generic card pool.

The Hope Merchant’s Hood can help decrease variance by giving you an onboard mulligan opportunity. Commoner, like Blitz, can have some high-speed games, so you won’t want to sit on a less than stellar hand.

In the Chest slot, you’re looking to generate resources if you’re selecting away from armor. Heartened Cross Strap, Deep Blue, and Vest of the First Fist will all be popular options. The former can allow you to attack with a 2-cost card from hand after blocking the other 3 cards. The latter gives you another chance to fix a low-resource hand by generating an additional 2 resources.

If you’re picking between Ironrot Gauntlet and Goliath Gauntlet, you may want to go for the offensive option. Of course, that depends on what kind of attacks you’re running in your deck—Goliath Gauntlet only works with cards that cost 2 or greater.

Finally, what may just be the most popular piece of equipment in the format, Snapdragon Scalers, is nothing to scoff at. This once-per-game pair of boots can help you swing the tempo of the contest by attacking an additional time—forcing your opponent to take further damage or block with precious cards from their hand. 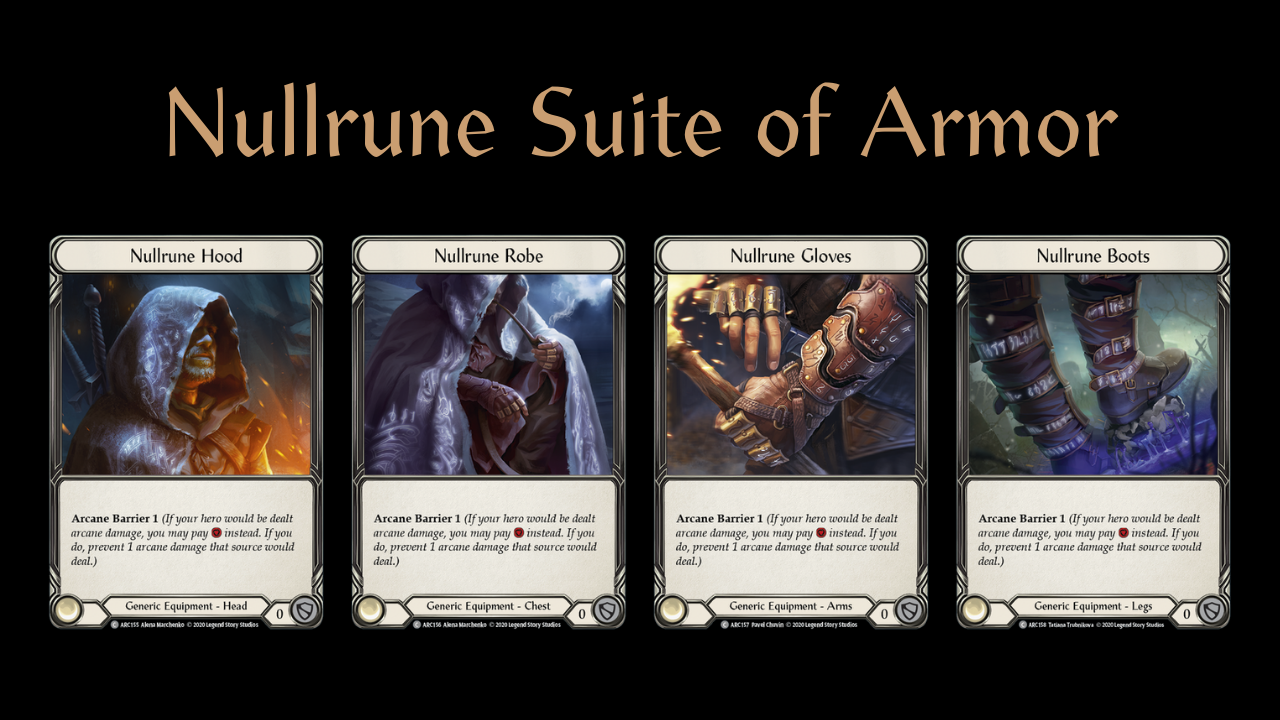 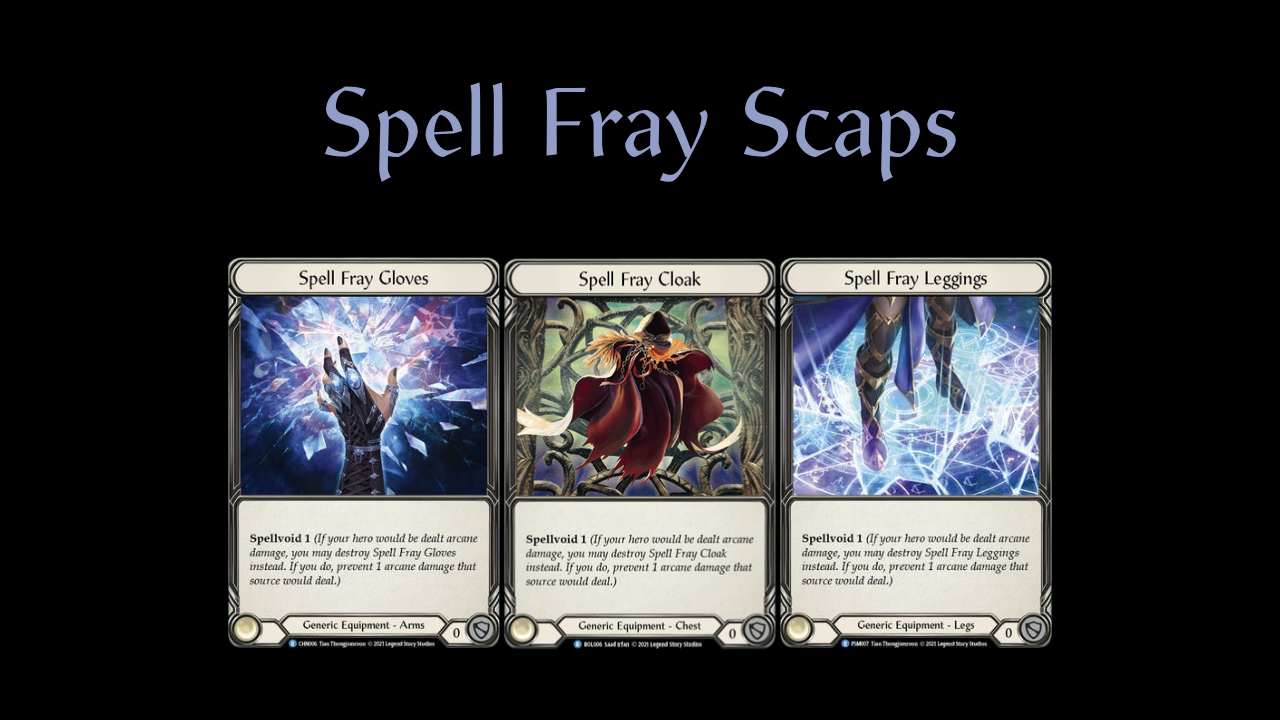 Your last consideration for your inventory comes in the form of magic-protecting garments. Against a Wizard hero or a Runeblade, you’ll want to carry in some form of arcane security.

Similar to the Ironhide set of armor, to run Nullrune pieces, you’ll need an ample amount of blue-pitch cards in your deck to make blocking arcane damage worth your while. If the opponent is threatening lethal damage, you don’t want to spend 1 red card to stop 1 point of damage.

Alternatively, if you’re mainly running red cards but still want to stop some arcane damage, you may want to consider the Spell Fray cards. Since they’re technically rare, you could only run a maximum of 2 pieces, but they can prove to be the difference in a close match against a Runeblade wielding Rosetta Thorn.

Commoner is sure to be a fun format for new players and diversity in the off-season of competitive play. If you haven’t been collecting for long, I recommend picking up some of the above pieces. Nearly every card I’ve mentioned will be available in History Pack 1 with white borders.

If you’d like to see some competitive lists, check out my take on Rhinar in The Rathe Times and my Red Liner Control Lexi list on my blog, Collision Point.

If you’re a fellow content creator, hit me up! I’d love to boost your SEO by creating a post about you and flooding your content with backlinks.

Please consider supporting me on my new Patreon campaign.

Check me out on YouTube alongside my brother on our channel: Flesh and Blood Brothers.

Drop me a tip via PayPal.

Subscribe to my blog with your email address below.

View all posts by Collision Point